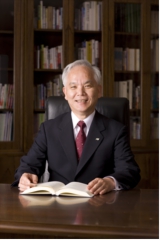 I am delighted to announce on the launch of this new program for Leading Graduate Schools, titled PhD Professionals: Gateway to Success in Frontier Asia.
Nagoya University’s Academic Charter establishes the foundation of the university, embodies our commitment to “free and vibrant” academic culture, as well as the responsibility of the university “to contribute to the enlightenment of humanity and its society and the prosperity of global industry” by “spearheading advanced and innovative research activities, and through nurturing and fostering new generations of talents capable of exercising leadership in the global arenas”. Furthermore, we have pushed forward with measures as part of the Hamaguchi Plan, an initiative I put in place at the start of my presidency, in order to transform Nagoya University into a world- class institution. These measures include the enhancement for the quality and diversity of the education we provide, the promotion of Global Center of Excellence Programs and the Global 30 Project, both of which are designed to encourage Japan’s leading universities to internationalize their degree programs further. Common to all these measures is of their importance in achieving one of the university’s most essential goals, namely the establishment of a more accessible environment as an educational institution of the highest global standards.
At the same time, the Nagoya University focuses on providing more educational / scholastic opportunities to young graduates and researchers, as another key issue alongside the internationalization of the university itself. Our action plans include career development programs, such as the Young Leaders Cultivation Program, and the B-Jin Business Capacity Development Center, designed to assist postdocs and graduate students to find careers in industry and government. These initiatives demonstrate our commitment both to providing young researchers with outstanding educational opportunities and to supporting postdocs and students to excel in the next stage of their careers.

The “Gateway to Success” Program has been carefully designed to foster talented young graduates to take on the challenge in planning strategies for the advancement of Japan and the rest of the world in the coming years. The program will encourage graduate students to work beyond the traditional delineations of graduate schools, to work together with international students to take a hands-on approach in learning about the diversity and enriched cultural history of Asia as well as the reality of life today in its many countries. Eventually, our apprentices will graduate the program as experts in Frontier Asia, uniquely equipped to take up roles as regional leaders. As part of the program, it is pivotal to educate our young fellows about entrepreneurship and English language skills necessary for today’s global market. For the purpose, we will have North Carolina Ambition Camps at NU Tech, an office of the university established in North Carolina in the U.S.
I look forward to welcoming highly motivated and spirited students into this exciting new program. 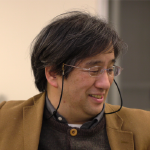 To make matters worse, research and educational institutions are forced to reduce further the number of teaching and research staffs. As a result, PhDs today are having a very difficult time in finding permanent jobs.
Unlike graduates with master’s degrees, PhDs trying to find positions in industry or government are facing many unique issues. Industry and government sectors are not actively seeking to hire PhDs, and even if they do hire PhDs, in most cases the doctoral degree is not appreciated. For example, PhDs would typically receive the same salary as an employee with only a master’s degree.

PhDs are fundamentally intelligent and possess excellent problem-solving skills. They are often misunderstood as being interested only in a highly specialized field of study and as having no transferrable skills. In reality, however, PhDs are high-caliber think-tanks who can think flexibly on their feet and have a high potential for success.
Not only industries and government are to blame for the reason why PhDs are facing difficulties in excelling outside of academia. A major part of the blame lies within graduate studies in universities, which are so polarized that they have long been geared towards training future colleagues and successors in academia.

The PhD Professionals: Gateway to Success in Frontier Asia Program provides an education that is necessary for PhDs to succeed not only as professors of an academic field, but as professionals who can contribute to multifaceted sectors of society. Specifically, the program offers a variety of courses designed to develop five “spoke” competencies: (1) the ability to identify and solve problems independently, (2) communication and management skills, (3) the ability to comprehend the international context and cultural differences, (4) the ability to grasp methodology and purpose of studies in academic fields outside of his/her own, and (5) mastery in debate and self-expression skills. Along with these special “spoke” courses, participating students will receive “core” graduate education from each respective graduate school to complement their regular Ph.D. (or its equivalent) curriculum.
The ultimate goal for the PhD Professionals: Gateway to Success in Frontier Asia Program is to foster PhD professionals to attain a high-level of skills from both “core” and “spoke” programs, and to nurture them to become creative and insightful thinkers.

We look forward to the day in which the graduates from the PhD professional program – equipped with better understanding of their cultures, customs and daily lives in the Frontier Asia – will take on leadership roles in these Frontier Asia countries and wherever their final destinations would be in the global society.